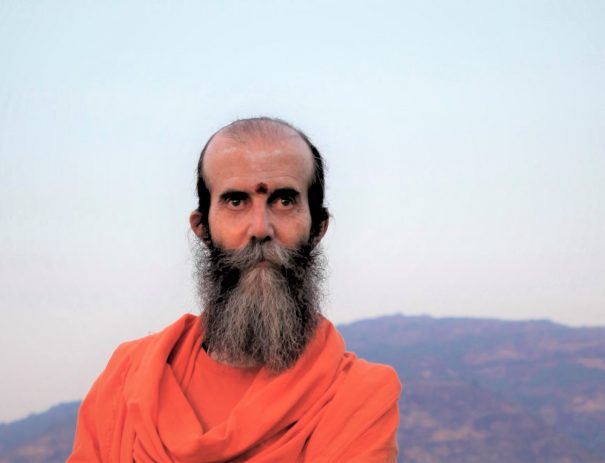 This Barcelonaborn born in 1955, who lived half a life in India and was a disciple of Swami Muktananda, is still very active in imparting these teachings of yoga and Hinduism that he knows and practices with coherence and depth. (See links to previous interviews below and web Advaitavidya).

Swami Satyananda's statements have no waste. We have divided them into keys:

Q: You are a leading witness to the evolution of yoga in Spain. We would like to know your assessment: in view of everything that is now offered by yoga, what is being lost?

A: In this civilization in which we live everything is marketed, and in yoga the same thing has happened. The most alarming thing is that is losing its roots. Obviously there are very valid teachings but others are completely disassociated from the mother, who is Hinduism. Yoga is a dharsan, a philosophical school, a traditional vision of Hinduism, and its goal is not the perfect posture; is samadhi, absorption.

Of course the teacher can help the student who has back pain or is nervous, but should be a guide to take it a little further. Yoga takes us to another state of consciousness, and sometimes this is canceled, does not present itself in any way, and stays in very beautiful exercises. In all the classic texts of yoga it is said that the postures themselves are not so important, and what does have it is the inner state, the inner silence that the healthy ones generate, that purify the body and balance the prana. This makes the mind more satony, more luminous, and from here you access states of fullness.

If we ignore all this, we have a very small yoga left, and it's a shame because we could get so much more. But Here it comes the responsibility of the trainers. There are many teacher trainers, but is your life yolk enough,have you had enough knowledge, have you immersed yourself in it? Because it's not what you know; is what you live.

This is not an assessment but an observation, what I see.

2nd Key: The Responsibility of Trainers (and what it costs to hold a center)

Q: What can be done to improve this state of affairs?

A: I think those who do training have a great responsibility here, what happens is that in this civilization we are all in a hurry; someone does an intensive six-month course and is already a teacher. Not only this, but it sets up a center and it doesn't work because it doesn't have enough classes, the rents are expensive, you have to pay taxes... what are you going to do to support it? Invent a teacher course, which gives income. And we already have a person with relatively little experience explaining what he's heard, that is, as my master said, soup soup soup.

I think you have an important role in this: try through your medium, which reaches a lot of people, seeking this excellence from all of us who are teaching.

Q: Should schools more insist on offering these values?

A: I think so. They should insist much more on the yamas and niyamas, and that the teacher is the expression of yoga... Because if he does not practice intensely, what will he share?; just the surface, the outermost part.

3rd Key: Meditation can lead to self-deception... if you don't follow a path

Q: Even meditation seems to have become "fashionable". Is any form of meditation, any purportedly meditative act valid?

A: If one does not follow a path, meditation may be a small moment of silence, but it is not part of something much larger. In traditional Hinduism, one follows a path, a teaching, a lineage. Here is a blessing, a power that you absorb, digitize and transform you.

Sometimes the Westerner doesn't mind having drawing teachers, driving... but having a spiritual master costs you more; it's a contradiction, because it's a very subtle world where self-deception, ego, can go away repeatedly and you think you're too high when you haven't even started the road.

We have to realize that, if we want to use meditation properly, this has to be part of something, it's not wholesale. There are different meditations, Zen, Mahayana Buddhism, Tantra, Radya yoga. And each has a shakti, a transformative power, and this power comes from the teachers who share it, from the lineage that accompanies it.

And then when we see the meditation that is marketed just to find you a little better or to be more productive... then we do already move away from what it should be. We meditate to self-indate the fullness of our essence, not to work better or to be less stressed. These are just by-products that should not be given so much importance.

Key 4: Meditate, much more than an anti-stress method

Q: She has recently given a seminar on meditation from yoga and tantra. Can you learn to meditate correctly in a few hours or on a weekend?

A: No, but if someone feels a connection to this process inside, it's the beginning. We all have to start at some point. Whether it's an hour or ten days, it would also be insufficient. Sometimes we want to learn... But meditation only teaches you itself over the years... and with the thousands of hours you've meditated.

That one feels a little better for sitting down does not change anything; you still have a very heavy character. Meditation wants to take you beyond this character.

Q: Tell us about that purification process...

A: It is a part of the meditative process, purifying, cleaning the psychic content of the person, but also, as it is purified, the observation of what one is remains. And what one is has nothing to do with our body or mind; it's fullness. The achievement of meditation is impressive... and we use it for something very small like finding ourselves something better.

It's a bit like yoga: we should put the word yoga and meditation back in their proper place.

Key: Teachers who irritate us and Hindu coherence

Q: But sometimes we are advised to simply sit in silence. A mind hanging in the void leads to something?

A: It can make you feel better. Unos momentos de estar en ti mismo siempre te ayudan; incluso el simple hecho de observar tus pensamientos puede ayudar a conocerte. Pero esto no es un camino por sí mismo. In the Shiva-sutras there is a phrase that says: "The guru is the medium". The teacher will teach you your infinitude and also that which prevents you from knowing your infinitude; your own mind is never going to show it to you. In the East it is so normal for a teacher to teach you, from freedom... Here we think of a teacher as if he were someone who takes possession of our life, and it is the opposite.

Q: It is said that yoga is not a religious path, and yet you approach it from Hinduism.

A: But it is that Hinduism is not a religion, but that its name is Sanata dharma, the eternal dharma. It comes from any sacred book, from any messiah or prophet, from any belief, or from having faith; is the observation of the cosmic order, Rita and this leads us to observe also who we are.

Hindu meditation is an integral part of Hinduism, it is its daughter, just as Buddhist meditation is the daughter of Buddhism. But it's like these Isms they irritate us... Yes, meditation is a Hindu spiritual practice, why not? And why can't I practice it, understand it, and deepen it if I feel it valid? Just like a Christian delves into the methods of Christian outreach. It's feeling part of something... To do it simply in my own way is often self-deception; the ego feels very satisfied but what fruit will this practice give?

Q: That's why you recommend sticking to traditional practices that derive from Hinduism...

A: If you feel this connection... Do you want to do real yoga? Well, stick to the Hindu yoga masters and the texts, because this is where all the sapience comes from, you don't need to go around a lot more.